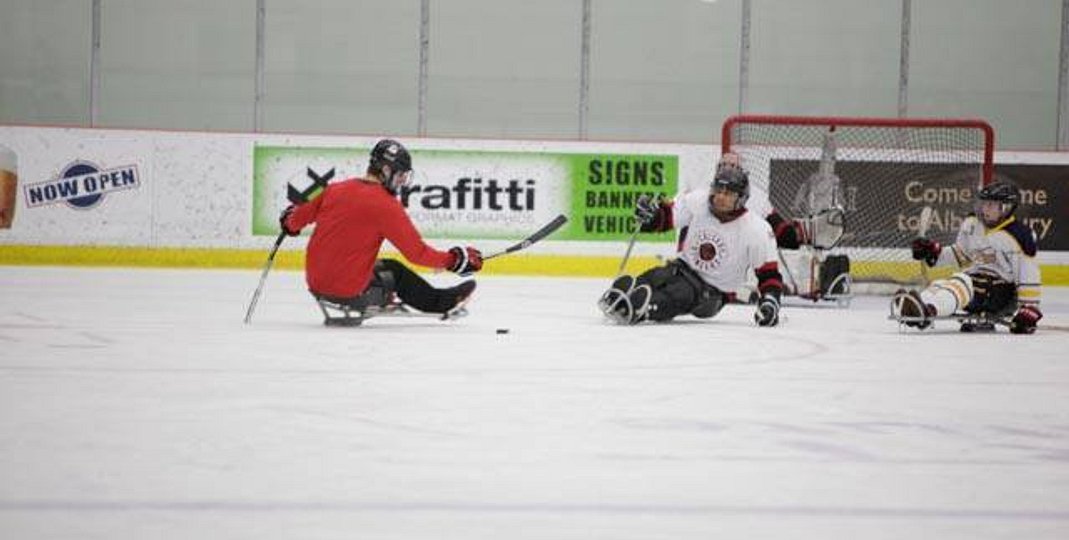 Calgary Sledge Hockey – The 2021-2022 season is almost underway! Come out for some great hockey action Monday, Wednesday and Saturday nights beginning Sep 13, 2015! Check our team page for information. We are a local sledge hockey club located in Calgary, Alberta, Canada. Sledge Hockey is open to people of all ages and genders. Individuals who wish to play sledge hockey should be aware that it requires a fair amount of upper body strength and balance to move around on the ice. What is sledge hockey? Sledge hockey is a Paralympic sport played at all levels around the world. The game incorporates some additional technologies to allow for the greatest amount of participation. It is an innovative team sport that incorporates the same rules and strategies as stand up ice hockey. Sledge Hockey players sit on specially designed sleds with skate blades under the seat and use two sticks, not only to pass, stick handle and shoot the puck but also to propel and maneuver their sleds. All hockey gear including a full face shield and a neck protecter are required to play sledge hockey. Our Supporters The Calgary Scorpions (our Senior team), Calgary Stingers (our intermediate team) and the Calgary Venom, (our developing novice team) receive much needed support for ice time and equipment from various community supporters. We are also a proud member of Hockey Alberta, the first provincial minor hockey organization to recognize the sport of sledge hockey. Thanks to each of these organizations for their support. Please email us if you or your organization would like to become involved.